SEARCH ARCHITECTS OR SEND US YOUR REQUIREMENT, WE WILL ASSIGN AN APPROPRIATE ARCHITECT TO YOU   SEND NOW 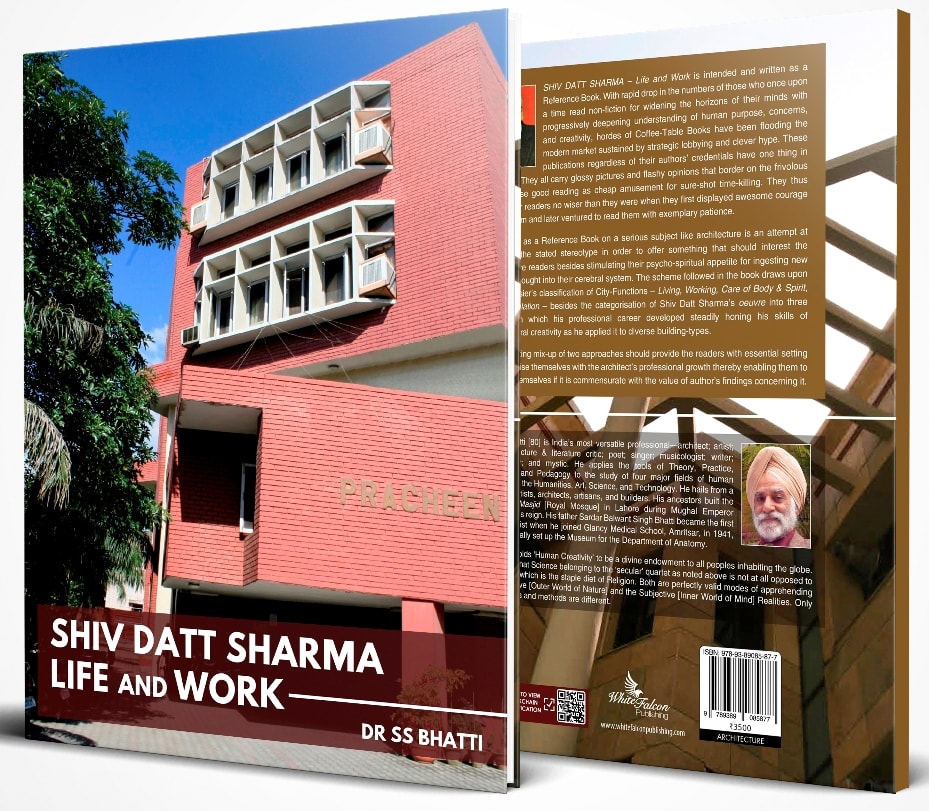 This book has been written on the renowned architect of India, who known for his great contribution to the architect. Shiv Datt Sharma is one of the most known modernist architects, he contributed to the making of the latest architectural structure all over the country. This book based on his entire career. This book has been categories into three phases of his career, which was started from the age of 28 when he has started his career from 1959. Now he is 88 years old but still working as a young architect.

This book "Shiv Datt Sharma: Life and Works" was launched by the Governor of Punjab and Administrator of Union Territory of Chandigarh VP Singh Badnore on 17 September 2019 at Punjab Raj Bhawan Chandigarh. This book will be used as a reference book for the students, teachers, and the architect, who is deeply involved in the area of the architect.

He served as a professional for about six decades, during this Sharma has worked a large no of the project from small houses to large campuses. Out of his total project, 41 has been selected for this book. this has been categories between three-section, which are namely, Living, Working, and are of Body and Spirit. The nomenclature of these three categories is in sync with the three major functions of the city of Chandigarh as conceptualized by Le Corbusier. Each section of the book is introduced by a brief note on the classified city function. Included in each Section are select buildings that are representative of the architect's varied responses to divergent design programs, without deviating from his professional credo.

Shiv Datt Sharma's architecture is a mixture of the core principles of modernism, interpreted through the lens of contemporary Indian realities.
He started his career as an architect in the Chandigarh Capital Project as a part of the team, this project had been led by the famous architect Le Corbusier, Pierre Jeanneret, Maxwell Fry, and Jane Drew. Working with these architects, he developed a personal relationship with Jeanneret whom he would regard as his mentor long after he has gone. This was the time when he learned a lot of things which brought him a leading architect of Indian architect history. During his initial time, he learned the art and craft of Indian Modernism in the very laboratory where it was being developed. Learning how to design for the climate, using local, readily available materials, with absolute honesty and directness were lessons that were to stay with Sharma through his long career to come. Sharma worked in the Chandigarh Capital Project till 1973.

After some time he joined the Department of Space, Government of India and worked as Chief Architect for the Indian Space Research Organisation (ISRO). During working in ISRO he got a chance to work across India. He worked all parts of India and build different types of designs in many places. The diverse locations of projects necessitated finding appropriate local ways of working, which ranged from working with completely indigenous material and skills to deploying prefabricated components in isolated, island locations such as Car Nicobar.

While working in ISRO, Sharma matured his art of the so-called 'service-focused architecture'. In the process, he was able to establish his architectural idiom in dialogue with renowned scientists such as Vikram Sarabhai, Satish Dhawan, Yash Pal, and UR Rao. He served in ISRO till 1980, after that he set up his office in Chandigarh, where he started his own practice. Now he is still working as a young architect at the age of 88.